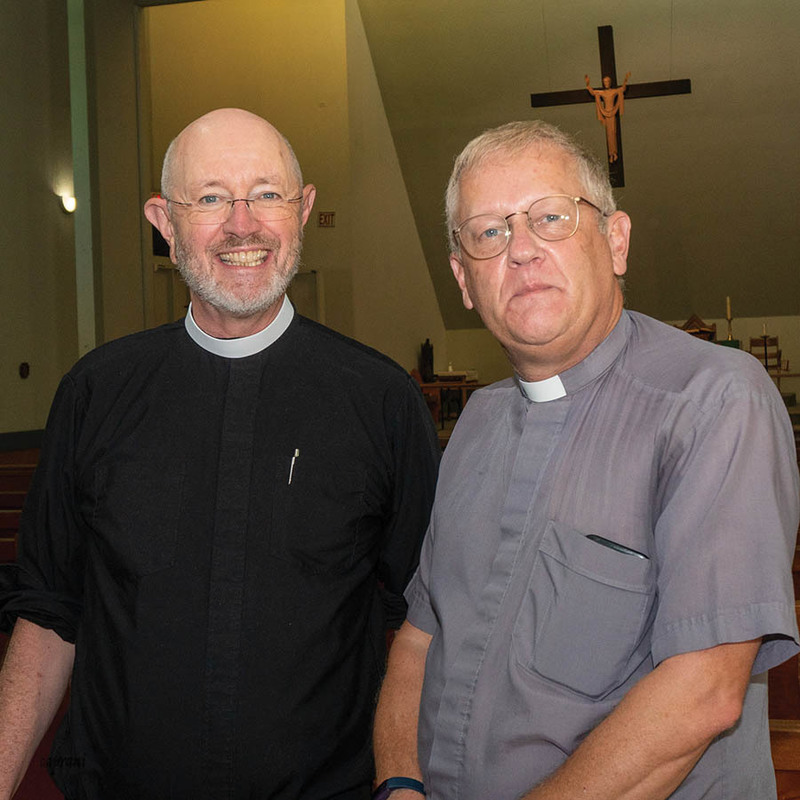 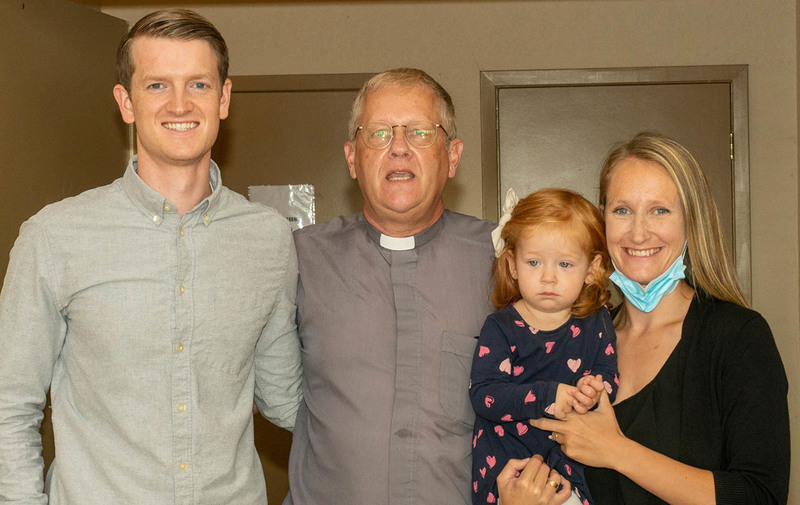 Thanks, Stephen for inviting me to be part of today’s celebration of Eucharist and of your 20 years here at the Epiphany. What I want to do in the few minutes afforded me is three things: first say a few things about you, then to pivot to today’s observance of Holy Cross Day, and finally to invite us into a renewal of our faith in the God of resurrection hope. Feel free, dear friends in Christ, to say Amen if what I say resonates, or to applaud—especially for Stephen on this day. Stephen—you are loved here: congratulations on this anniversary!

I’ll say more, in just a moment, about my friendship with Stephen, but I want to share greetings from our Bishop John, who asked that I convey these words, “I am grateful for Stephen’s ministry over the past 20 years. He brings a wonderful combination to his ministry: pastoral care, humour, attention to detail, hard work and a deep faith. He is appreciated for his ministry at Epiphany but also throughout the Diocese over many years.”

And Bishop Michael Ingham sends his greetings today remembering this about Stephen: “I admire many of Stephen’s qualities and talents, but perhaps the one I have most enjoyed is his sense of humour. Stephen always manages to cheer people up and make them smile. I remember one time at Diocesan Synod he dressed up as a hockey referee – complete with striped shirt and whistle – and blew fouls and goals, even sending people to the penalty box. It lightened some “pretty serious” moments. Stephen and Christine could always be relied upon to write a poem or a song for some amusing occasion. Amazing talent!” Clearly the three bishops in this diocese with whom he has worked admire and respect Stephen.

And then, Stephen and my mutual friend Randy Murray offered this story, “While filming the first-ever piece produced by the diocesan comms team of Randy Murray, Cliff Caprani and Wayne Chose, a number of things happened. As we were doing it by the seat of our pants, we didn't use a teleprompter so Stephen as the presenter had to read from a script on a clipboard. All of Stephen’s segments were on location. For the first two days of shooting, he had a very bad cold and struggled to hide his congestion: what he couldn't hide was his inability to pronounce one of the keywords in the documentary. Invariably he would flub the word and coupled with his nasal congestion we all laughed. On the second day in a different location, he was feeling a bit better. Aware that the troublesome word was coming up in the script we were all pretty sure that there wouldn't be any problems. The cameras were rolling, Randy was holding the large silver reflective disc out of the shot used to make sure the light was evenly distributed on Stephen's face. Everyone felt the tension as the word was about to be read. Stephen began the sentence with confidence and completely mispronounced it, Randy jerked backward in laughter and fell in the gravel with the disc on top of him, Cliff and Wayne were crying with laughter. But Stephen remained stoic and pulled himself together for take two. That's the kind of guy he is.”

To summarize: Stephen is undaunted by difficulty, able to deal with difficult circumstances, thoughtful, careful, honest, lovably ironic, dedicated, with a great sense of humour, a pastor who attends to detail, works hard and with a deep faith. Does that sound like the person who you’ve come to love and respect over these many years at the Epiphany? Stephen and I have known each other from his earliest days in the diocese. Through his years as an Archdeacon, he and I attended more meetings together than I could ever count, shared many laughs and, also some exasperation with church doings. I came to rely on his counsel and good advice and cherish him as a friend. And here comes the pivot to Holy Cross Day. My first real conversation with Stephen was a difficult one. He had come to the diocese for a particular ministry, and it wasn’t working out well. He and Christine came to my office: I was filling in for the bishop while he was away; they spoke to me about how difficult things were. What impressed me about Stephen that day and ever since was his unwillingness to speak anything but the truth. He sized up the situation, saw that he couldn’t really make a positive contribution there, and was willing to sacrifice his pride and risk losing his job for the sake of his integrity. And although I did encourage him to persist, he had, of course, read the situation accurately and he did leave—and those circumstances brought him, kind of by default, here to Epiphany where he was expected simply to fill in for a short time. 20 years later, here we are.

And here’s my point: life is filled with heartbreaks and disappointments. Even our best-laid plans sometimes don’t work out as we hope. But God is in the business of resurrection, of new hope and of new life. This of course us to the cross. Holy Cross Day commemorates the event, 300 years after Jesus’ time on earth when the Church of the Holy Sepulchre was dedicated in Jerusalem—a church built on the historic site of Jesus' crucifixion and resurrection. There, to this day, pilgrims come to kneel at the site of the cross and to stand for a moment near the tomb where Jesus was buried.

The important thing is that crucifixion and resurrection are not just remembrances of our history, they are realities experienced as we move through life. The crucifixion of Jesus brings to our minds the suffering of so many because of the violence of oppressive regimes throughout the world—whether in Iraq or Afghanistan or the many places where the innocent suffer at the hands of the corrupt leaders—in the face of the crucified Christ we see their faces. Jesus’ crucifixion takes us to the mystery of the Incarnation—that God took on human flesh—and shared with all of humanity not only the joys of life but also the deep pains and suffering that accompany so many. And in the crucifixion, the true and living God shares with us the inevitability of death— when our time comes, we know that the one who has loved us from all eternity has himself experienced the reality of death and so we are not alone.

The cross takes us to these places of suffering, disappointment, and death but it also takes us to the place that is the source of our hope and that is resurrection. From John’s gospel we heard the familiar words from the 3rd chapter, “For God so loved he world that he gave his only Son.” Let me frame these words for you by expressing them in a slightly different way. God loved the world in this way—by becoming part of the flow of human life—everyone who believes into this will find a quality of life that is deeper and eternal—for God did not come into the flow of human life to condemn the world but rather so that healing will be available to all. The word ‘salvation’ means healing—and it is the purpose of God in Christ to bring healing. Healing is the meaning of the cross. And healing whether for our bodies or our souls is not a quick fix, it takes time: it is the slow work of God.

For Jesus the resurrection meant that God would not allow the forces of power and injustice to have the final word. And so, God raised up Jesus to show to all that there is always new life even after the worst has happened. This is the promise offered to us all. That whatever life throws at us, whether its disappointment in our work, suffering from illness, grieving a loss, or facing our own mortality there is a power deeper and stronger than we can imagine pulling us toward a future inhabited by the love that is at the heart of the universe--the love of God that we see in Jesus Christ.

It doesn’t happen instantly. Disappointment can last a long time, grief takes forever to move through, and our bodies heal from illnesses only with time. Healing takes time and it’s one of the great gifts of a long incumbency—that a priest and congregation move through many years together, through times of sorrow and times of joy bring a deep sense of the constancy and reliability of the grace of God. Here at the Epiphany, you’ve had your joys and you’ve been frustrated by the starts and stops of achieving your vision for a new building. But you’ve stayed together through it all and I am confident that God’s power, working in your will do infinitely more than you can ask or imagine.

So, take heart, celebrate this day as we give thanks for the two decades of ministry that Stephen has shared with you. I leave you with words from the Jesuit theologian Pierre Teilhard de Chardin:

“Above all, trust in the slow work of God.
We are quite naturally impatient in everything to reach the end without delay.
We should like to skip the intermediate stages.
We are impatient of being on the way to something unknown, something new.. .
Give Our Lord the benefit of believing that his hand is leading you.”