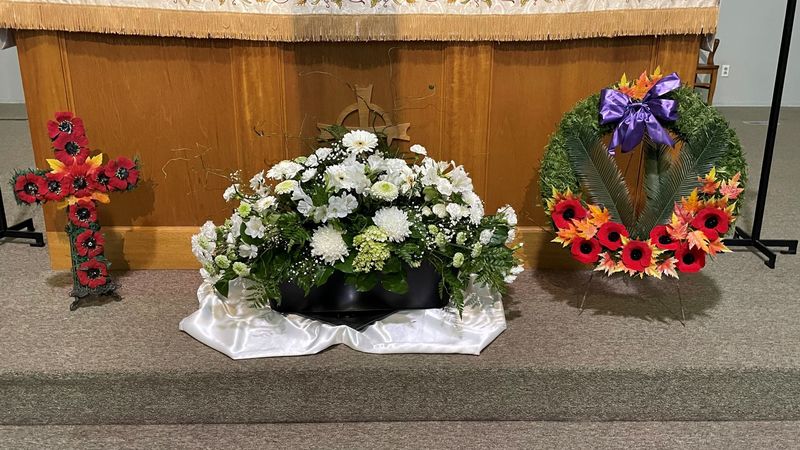 Gracious God, grant that peoples of the earth, now divided and enslaved by sin, may be freed and brought together under your gentle and loving rule, Amen

The last few days have painted a picture of devastation and destruction in our Province. After two very wet months, all the rain that fell on Sunday and Monday led to the damage and flooding that we have all witnessed in the media. Although I was in the UK I was able to track the news and could hardly believe the extensive flooding of the Sumas Prairie as well as the destruction of so many of our highways.

People’s homes and livelihoods have been destroyed and the recovery will take many months. We may all see some shortages, but at the same time have been reassured that food supplies will be maintained. After the extreme weather of the summer now we have encountered extreme weather that saw saturated land inundated with rain over a 48 hour period.

Where is God in all this?

First, we acknowledge that God is with us in the trials and tribulations of life. Secondly, we have to consider the human impact on the natural habitat in which we live.  I confess until the middle of last week I had no idea that Sumas Prairie was a lake drained for agricultural purposes. We may have to reconsider how we protect the areas that flooded so disastrously. Thirdly our role is to pray and support those directly affected by the floods and devastation. Today our thoughts are with those who have died or been bereaved, those injured, and those whose homes or workplaces have been damaged by flooding.

It is now over 90 years ago since the Pope instituted a new liturgical observance which we commemorate today, the Feast of Christ the King or the Reign of Christ. It marks the last Sunday of Pentecost, and therefore the Sunday next before Advent.

We tend to think of secularism as a modern-day trait, but the Pope introduced this occasion because he felt followers of Christ were being directed more towards secularism, and therefore living in the ‘kingdom’ of the world rather than in the kingdom of God.

So our question today is: who is Jesus Christ in our lives. The gospel tells us that Jesus is asked if he is the King of the Jews. Jesus says his kingdom is not of this world (the point the Pope wanted Christians to adopt). Finally (after some back and forth with Pilate) Jesus says: ‘You say that I am a king. For this I was born, and for this I came into the world, to testify to the truth. Everyone who belongs to the truth listens to my voice’.

Pilate is only concerned about Jesus’ political aspirations in case he were to challenge the Roman occupation. Jesus, and this is the point for those who follow him, is the Word of God, born as a human being sent from God. This was so that ‘everyone who believes in him may not perish but have eternal life’.

If we see Jesus as from God, and if we listen to the truth he speaks, we separate ourselves from the world and are part of the kingdom of God. This then is a reminder of what we are about to prepare to celebrate: the birth of Christ as king. One commentator (Hogan) asks us to consider: Do we live in the reign of God, following the servant king? Do our lives reflect that service? Do we concern ourselves with the lost and forsaken? Are we more interested to be served than to serve?

Jesus of course was the very opposite of a despotic king. As we know, Jesus gave up all opportunities to base his kingship (from God) in the exercise of any human power. Instead, Jesus was obedient to God, became vulnerable, and was tried without attempting to defend himself, or escape punishment. Rather Jesus offered himself to God, and to the world, as the one who would suffer and die for the sake of the whole human race. This is at the heart of the Christian gospel and, as we approach the beginning of the new Christian year with Advent Sunday, we are reminded of the essence of the gospel: the passion, death and resurrection of Christ.

There is a danger (in the church) in us worrying about whether the world takes us very seriously anymore. Instead, we need to concentrate on getting on with the work that God has called us to do.

As this week has reminded us life can seem pretty chaotic and fragile at times. As we journey through it we can face illness, surgery, depression, or loss of income or work, family breakup or distress. In fact, things can seem pretty much out of control and the more we try to get a grip the more things seem to be a challenge.

And of course time after time we forget that we are not meant to be in control – God is. We have to be reminded that our vocation as a community is to be faithful to God in exploring a vision for a church with new beginnings in a place of new beginnings.

The best things in life take hard work and are sometimes a struggle: relationships, work, vocation, playing a musical instrument, learning to pray: none of them are achieved with the minimum of effort or commitment. Only when we keep on working and trying does fulfillment come. Indeed struggle itself is not a sign of the absence of God, for if Christ’s journey to the cross was not about struggle what on earth was it about?

Our call is to testify to Christ. We are confident in the endpoint for we know that Jesus died on the cross and by so doing enables us to be born to new life in his death and resurrection.