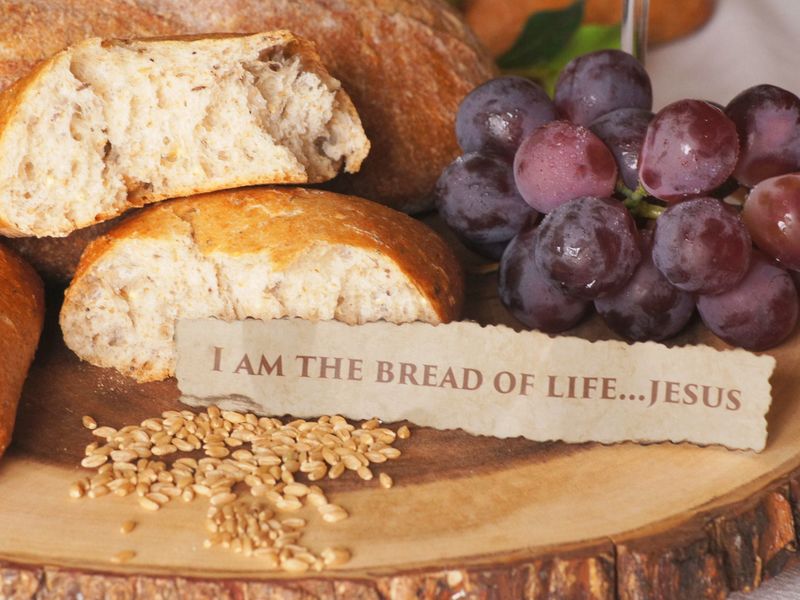 Gracious God, send us your Holy Spirit and pour into our hearts that most excellent gift of love, the true bond of peace and of all virtue, Amen

So at last we come to the final of the many passages on the Bread of Life. John suggests (according to one commentator) that the ‘true’ food is the body and blood of Christ which satisfies human hunger and thirst. This sustenance comes from within a person through their communion with God through Christ, which allows them to live the life that God desires and hopes for all of us.

We are very aware that a good proportion of our community is still unable to receive the body and blood of Christ in person. For almost 18 months now many people have been separated from this sacrament in a way we would have never imagined before March 2020. And although we all long for the day when most of us can be together in Church, we now understand that part of our spiritual growth and sustenance has been made possible by virtual worship. As we started on Zoom in March last year we realized that there was a spiritual connection, which was very apparent as faces appeared in their boxes on the computer screen Sunday by Sunday. As your priest and spiritual leader, though I was separated from you physically, that we were separated from each other, spiritually this was not the case. And now as we life-stream the Eucharist, we believe we are feed spiritually by the bread and wine, even when we cannot receive it in person, by participating virtually in our services.

Christ was sent by God; he became human because God willed this to happen. When we participate in the body and blood of Christ by receiving these gifts at the Eucharist we are reminded that as God sent the Son, so the Son sends us, we are in the world because Jesus willed it. Our lives are given that we might obey the Son and serve his will, as Jesus himself obeys, and serves the will of God.

Christ comes to us and is known to us: in ‘the breaking of the bread. This was how the early Church named what we call the Eucharist. It most likely derives from the actual breaking of bread which in all three gospel traditions (aside from John that is) record that Jesus ‘took a loaf, gave thanks, and broke it’.

After the Eucharist Prayer (in our service) comes the Breaking of the Bread which is where the priest says We break this bread to share in the body of Christ … to which the congregation responds: We, being many, are one body, for we all share in the one bread.

The bread which Jesus is has come from heaven, feeding people with the nourishment that leads to eternal life. This is our deepest communion with God, literally, as we eat the broken bread (the body of Christ) and drink the wine (the blood of Christ).

As we might remember, when the people of God first left Egypt for the Promised Land all was well. However, it wasn’t long before the grumbling started. After all what else would you expect with a group of human beings! The people felt God wasn’t taking care of them, so questions about water, food and their safety came to the top of the list of complaints. Whereas in the gospel grumbling happens against Jesus: again on the basis of a lack of trust which is spoken of as ‘the ones that did not believe’.

When the people of God were in the wilderness, most of their regular social and religious ways of life changed. They no longer could worship God in the way they had done even when they lived as slaves in Egypt. Their religious lives were turned upside down. That is what has happened to us in the last 18 months. We attended church weekly without giving it a second thought. But then the pandemic happened. Now we can resume our worship with some restrictions like masks, but many of the congregation remain online each Sunday. We rejoice that we can join together in person and virtually, we also long for the day when we can be together more completely.

The disciples (the wider group of followers, not the 12) themselves (like the peoples in the wilderness in Exodus) lack trust in God’s on-going support for them as Jesus seeks to teach, encourage them and prepare them for the life to come.   John speaks often of abiding, itself a beautiful and rich word. So when Jesus says: Those who eat my flesh and drink my blood remain (meaning abide) in me and I in them, implies that when we partake of the body and blood of Christ (either physically or spiritually) we abide with Jesus, and by this close connection Jesus brings us life.

Abiding is an interesting word. Staying with Jesus and learning from him is a long process, there are no quick fixes in the Christian faith. The crowd saw in Jesus a Moses figure who could work miracles, teach and much more. Yet the longer they ‘abide’ with Jesus the realisation comes that he does not offer an easy victory, rather the long road of discipleship.

Brother James of SSJE says this about following the way of Christ: