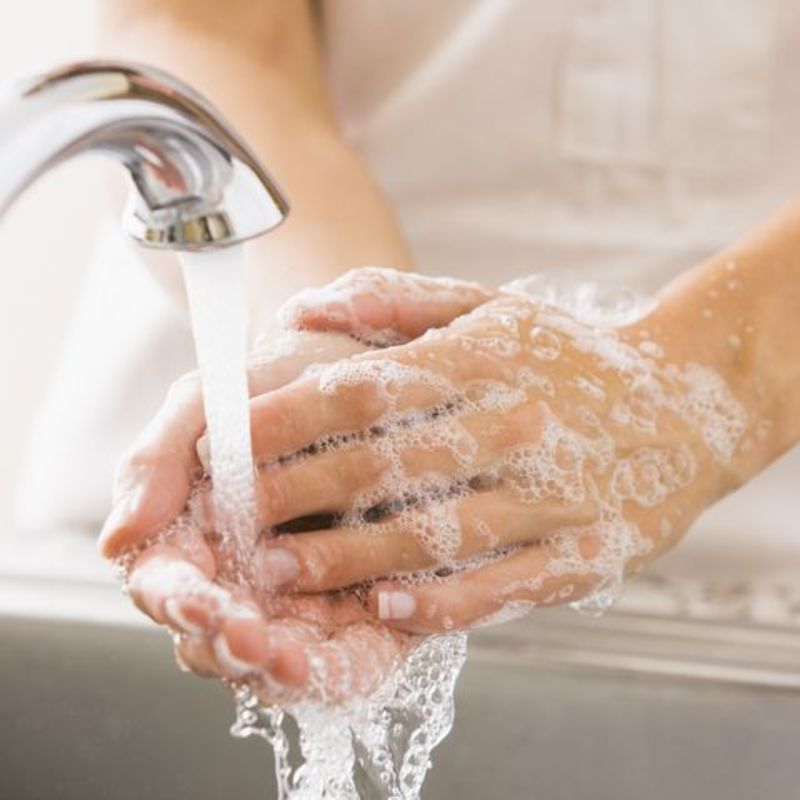 Gracious God, graft in our hearts the love of your name, increase in us true religion, nourish us in all goodness, and of your great mercy keep us in the same, Amen

Those of us who are parents spent quite a bit of time when our kids were small trying to get them to wash their hands before meals. It certainly seemed a constant challenge in my household. The same was the case with our older grandchildren until the pandemic came. Then everyone seemed to know that washing hands was something important to do when we came into the house, and especially if we were about to eat. Most of us realize today that washing our hands is just one of the things we do regularly during the pandemic to keep safe, like social distancing and wearing masks.

Jesus, it seems, at first glance, was having the same problem with the disciples. However, this was more of an issue for the scribes and Pharisees, up from Jerusalem, rather than for Jesus himself. We can assume there were wanting to find out what Jesus was up to and because they felt he threatened their religious institutions, they were keen to find fault. How exactly they knew the disciples were eating with ‘defiled hands’ we do not know, but they challenged Jesus on this very point.

The Pharisees, especially this group in the time of Jesus, were very keen to keep the letter of the Law, particularly in relation to the 613 precepts that guided their thinking. These set out specific instructions about how the Sabbath was to be observed, and how and when to wash one’s hands, not forgetting cups, pots and kettles, as well as washing anything they bought at the market before eating it.

Today as we return to Mark’s gospel, after a few weeks with John, Jesus is speaking to three sets of people at once: the Pharisees and scribes who are concerned about ritual defilement, to the crowd, and to the disciples meaning the 12.   The point Jesus was making was: we are defiled (made unclean) not from what comes from the outside of a person but from what is within.

The Pharisees suggest that all Jews washed their hands thoroughly before eating. In fact, the gospel tells us that some of the disciples did, and some didn’t, indicating that not all Jews followed this practice. The action, (as it were), then moves to the proper preparation of food. Again for Mark, the kingdom of God is more important than any other instructions or law, either from that time or from tradition.

Mark encourages his readers to prepare their hearts and themselves for the kingdom of God. So he tells us that the Pharisees and scribes came from Jerusalem: this is important. For Mark, his whole gospel account points to the death and resurrection of Jesus: which happens where: in Jerusalem. So the fact that religious authorities come from the holy city links this event to Jesus’ death and resurrection. Mark wants us to understand that the kingdom of God is at hand, right now, and therefore it is vital that Jesus’ message is understood.

The legal types wanted to catch Jesus out, they wanted to demonstrate that Jesus did not keep the Law. Yet Jesus counters this by quoting Isaiah, suggesting that for them human traditions had become so much more important than following God’s commands. In other words, we have to practice our Christian lives not just go through the appearance of doing so.  This was what Jesus accuses the Pharisees of doing.

The concern of Jesus was about matters of the heart, the nature of evil, and nothing to do with how to wash up or prepare food. These were common-sense rules about cleaning food and using different pots for different things: that is don’t cook food in the same pot as you wash clothes. But the legal-minded Pharisees and scribes had made it obligatory to follow these rules to the letter.

The first letter of James, which is more of an encouragement to ethical conduct, has some very sound ideas contained therein. The author reminds us that the act of giving, rather than the size of the gift is what counts, and such giving originated with God, beginning with the act of creation itself. The letter also offers advice on behaviour: ‘be quick to listen, slow to speak, slow to anger’ where we tend to be slow to listen and quick to speak and anger; which of course usually doesn’t end well!

And speaking of listening (as it were) we are encouraged to be doers of the word, not just hearers. In other words, if we only hear the gospel and then do nothing, we are going to find it hard to call ourselves followers of Christ.

One of the challenges for human beings who follow Christ is the gap between knowing about God and living and acting from what we know about God. Although this is called an epistle, it is more like wisdom literature (Thornburgh Sigmon) which was written for those early Christians in the Mediterranean region. It was offered as they developed their community life hoping to distinguish themselves from the world. In our time we do the same, not suggesting we are better, but seeking to be there for another in the joys and sorrows of our respective lives.

God is generous with the gifts of truth and wisdom. We should seek to dwell in these places to resist the ways of the world, which often focus on self not community, on power, status and wealth, rather than caring for the needs of others. God did not give us life so we could look after ourselves, but to look after one another. As verse 27 says our life in God is:

‘To care for orphans and widows in their distress, and to keep oneself unstained by the world’   This week we had a concrete example of this. We launched a Water Project to provide bottled water to those in need in our local community. By our generous offerings, and working with the North Surrey Lions, we have been able to provide thousands of bottles of water for the four locations of the Surrey Urban Mission.

We may be in a pandemic, some of us may still be unable to come to Church in person; but that doesn’t for a moment prevent us from caring for those who live in our community who have real, tangible needs.