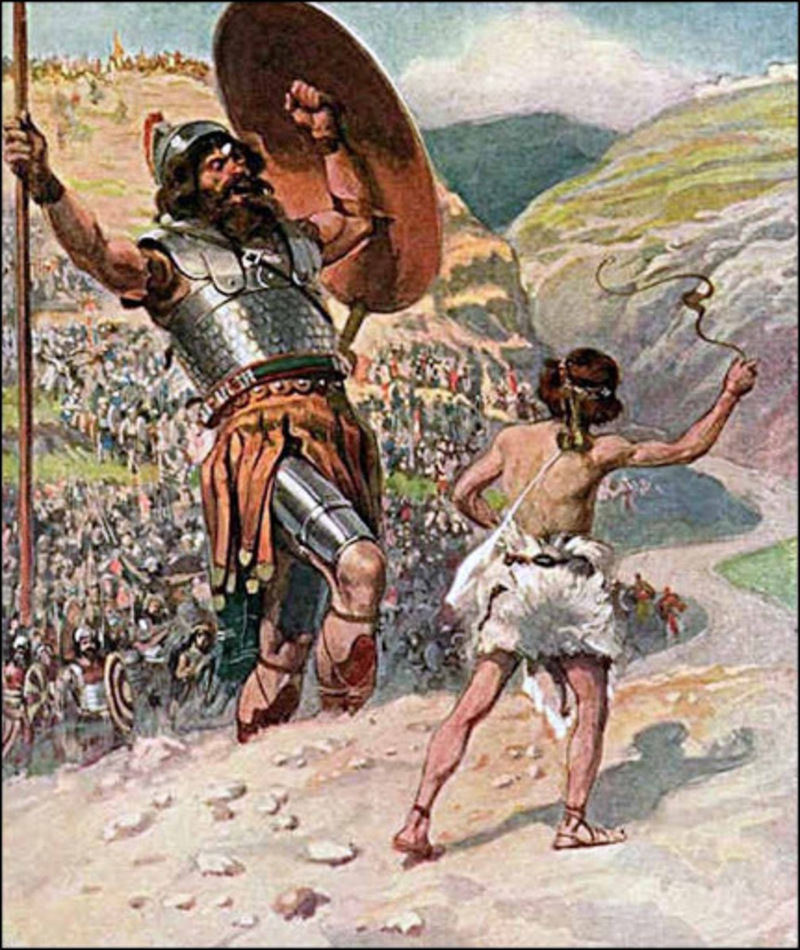 Gracious God, mercifully grant that your people, journeying together in partnership, may be strengthened and guided to help one another to grow into the full stature of Christ, Amen

It has always seemed to me that although we may like to watch drama on television or in movies, we never need to look too far for drama in our own lives as there is usually plenty enough going on. Also some people seem to have an abundance of drama in their lives, more than most of us want or can manage. And although drama in a hockey game or a rerun of a British detective show works for me, drama is not something I’m really all that keen on, in church life, or in my own life for the that matter. The latter attitude sometimes gets me in trouble.

We have two narratives today filled with drama. First the battle between David and Goliath and next Jesus calming the storm.

Last week we heard about the call of David to be king following Saul. Now David is in the company of the king, who people fear, and at war with the Philistines. In fact David, likely small of stature, and certainly small by comparison with the giant Goliath, actually volunteers to fight this foe. Saul tried to stop David, but he assures the king of his ability to fight off wild beasts when he was caring for the sheep: his point, he was not afraid. Saul wants to protect David and so has him dressed up in a whole suit of armour; but David cannot even walk, never mind enter into battle. So David faces the giant with five stones and a sling shot. Goliath is first insulted that the Israelites would send such an opponent into the field, but is ready to destroy or so he understands. Then David picks out a stone and fires it at Goliath’s head; he falls dead at David’s feet.

It often seems to me that the narrative about David parallels that of Joseph; a younger son who is rather precocious and for sure not appreciated by his jealous, elder brothers. David was self-contained and found comfort in his role as the shepherd. His isolated vocation draws him to confidence in God. Israel was just emerging as a nation (David would be only their second king after Saul) and so his defeat of the giant is one for the nation as a whole as much as it is for David.

Last Sunday we heard two parables about seeds; these are Mark’s way of speaking of the reign of God. From the outset of his gospel account, Mark preaches the gospel of God, and the coming of the kingdom, which brings repentance and belief in the good news, so the seed parables show how the kingdom is coming and will grow like a mustard seed.

So we turn to the dramatic boat ride. In Hebrew culture, the roaring sea is an image of chaos and the ability to control it, as divine power in action. It was also understood that when it seemed God had deserted the people, the Hebrews spoke of God as ‘sleeping’. So the storm and Jesus sleeping through it, have a context. In the boat, Jesus demonstrates his complete trust in God by sleeping, in the same way, David does so by going out fearlessly in face of the giant Goliath. After a long day of teaching and preaching, Jesus asks to go to the ‘other side’ of the Lake which was less populated, in hopes of finding some relief from the crowds. But Jesus is a carpenter, some of the disciples are fishermen and therefore used to the frequent storms on Lake Galilee. As Jesus sleeps, the disciples become terrified and wake Jesus up, asking him why he is allowing them to die in the storm. Jesus commands the sea to be still and then questions the faith of the disciples. However, at this point, they fail to see the connection between Jesus and God who could calm the waves. It is most likely that Mark is again helping us see how the disciples still did not understand who Jesus is.

It is fair to say that most if not all of us have faced and do face storms within our lives. This can be related to health, job, finances, and worries about our families or a global pandemic. The teaching is that whatever we face in life Jesus is there for us, as he was for the disciples in the boat that day. As we encounter the challenges, the storm of life, we are never alone – God in Jesus is there.

At this time, and especially today as we keep the National Indigenous Day of Prayer in the Anglican Church of Canada on this the nearest Sunday to June 21st, we face another storm within the life of the Church. The discovery of the remains of 215 indigenous children at the Kamloops Residential School has caused us once again to consider the legacy of our Church and its part in the abuse and death of such children. We don’t know how to react, we don’t know what to do, and yet we can neither ignore what has happened nor give up in despair. We continue to be in a time of listening and education and holding back from thinking this can be solved in this way or that. In the days ahead we should renew our own efforts to be part of the solution, rather than the problem, and look for ways to work together across the Diocese and our Church as a whole to seek honest reconciliation with First Nations people.

Perhaps too often in life we seek simple and neat solutions, we like things to be sorted out and resolved. The legacy of the residential schools can never be viewed in that way. It is a storm blowing us around and we must look to Jesus to calm the storm and provide us with a way forward.