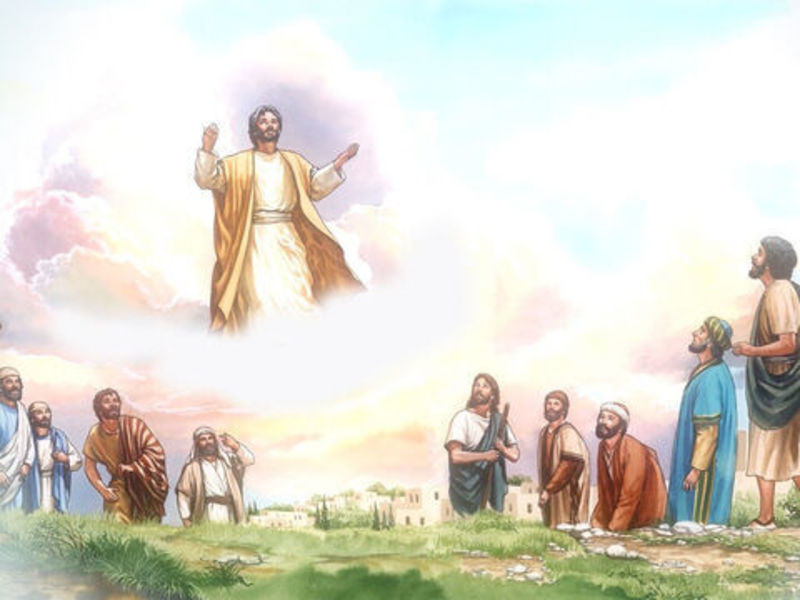 Loving God, mercifully give us faith to know that, as he promised, Jesus abides with us on earth to the end of time; Amen

In our thoughts and prayers especially in the last week have been the people of the Holy Land. As we know tensions between Arab and Jews in the Middle East have often been played out with violence and bloodshed regarding territory and holy sites which are important to three faith groups.

At times, our prayers are all we can offer. We know that people are suffering, people are being injured and people are dying. We pray for an end to this bloodshed and for all parties to seek peace and reconciliation with others who share this part of God’s earth.

In the Anglican Church of Canada, we keep this Sunday (the Sunday of the Ascension) as a day of prayer for Jerusalem, the focus of some of the tension and violence, and our prayers on this day are especially poignant.

The letter sent out on Thursday came from the Christian leaders of Jerusalem asking for an end to violence and for the international community to work for peace and reconciliation in the region.

It is not my role to offer any political reflections on this situation, but to encourage your prayers especially for those who are suffering and for those who have roles of leadership and can influence the future, both within and outside the region.

God of peace and mercy, inspire nations to transform oppression and violence into freedom and peace for the sake of the poor, the vulnerable and the broken-hearted. Help us to respect and promote the equality and dignity of all, particularly in your Holy Land. Grant discernment to leaders and legislators, that righteousness and truth may flourish among all peoples throughout the world.

In days gone by Ascension Day was kept on the Thursday, ten days before Pentecost, making the 40th and 50th days after Easter.

As a child, I got to have half a day off school to sing in the church choir for this festival. In more recent years Anglicans have tended to follow the Catholic tradition and move Ascension Day to the Sunday in the hopes of making it more of a celebration.

The ascension of Christ is referenced in the gospels of Mark and Luke (our passage today) as well as in the Acts of the Apostles. In theological terms, it marks the end of Christ’s post-resurrection appearances. This is important because Jesus promises the Holy Spirit, after his departure.

Since the fourth century of the Christian era, the feast of the Ascension was a major festival of the churches’ year. It was common for a procession to be held to mark the occasion, to commemorate the journey by Christ to the Mount of Olives where the ascension was believed to have occurred.

Much later it was also a rather curious practice of the church to extinguish the pascal or Easter candle after the reading of the gospel on Ascension Day. This symbolized that Christ had ascended, but was not the best idea theologically, as putting out the candle might imply Christ wasn’t present anymore. This idea generally died out about 50 years ago.

The gospel of Luke chapter 24 consists of a series of post-resurrection appearances and culminates with the ascension itself, our text for the day. Jesus, in speaking to the disciples, reminds them (Young Choi) that everything written about him in the scriptures must be fulfilled. This relates to his death and resurrection, and the continued proclamation in his name. Jesus had shared these words with the disciples before his death, and now he opens their minds and helps their understanding of the scriptures. He says that ‘repentance and forgiveness of sins will be proclaimed to all nations, beginning in Jerusalem.’

In the gospel of Luke (and in the Acts of the Apostles) the disciples are to stay in Jerusalem until they receive the promise of God, the Holy Spirit. They will at that time receive power and be Jesus’ witnesses ‘in Jerusalem, in all Judea and Samaria, and to the ends of the earth.’

Luke’s emphasis on Jesus’ ascension into heaven makes clear he is no longer physically present on earth. Also, that the resurrection is a call to service, which takes the form of the promise of the spirit. It is interesting that although Jesus shows the disciples his hands and feet (after his crucifixion); it is when he opens the scriptures to them that they truly understand. The risen Lord gives faith, and to those who already believe and are obedient, the Spirit is given as the power to live in faith, which means proclaiming Jesus in word and deed.

For me, there is always a danger in trying too hard to understand exactly what the scriptures mean. The gospel for today is the last verses of Luke’s gospel which seek to explain how the Holy Spirit was given to the Church.

When we look back at a persons’ life it is not always important to provide a biographical detail of where they were born, where they went to school, how they met their partner etc.

Though these details are relevant they do not always inform us who the person is. We tend to be more interested in their hobbies and interests, whether they had a sense of humour or if they were people who had a few friends or many. These are the details which assist us to know someone. In the same, the actions of Jesus in his life; how he associated and cared for people is so much more important than the details of how, when and where the Ascension took place.

So when we examine Jesus’ life it is perhaps less important to know when and how he left the earth and more vital to know what impression he left on the disciples in terms of how they might establish and direct the life of the early church. And it is now our role to be that church and once more await the coming of the Holy Spirit, which comes to us afresh next Sunday on the Feast of Pentecost.