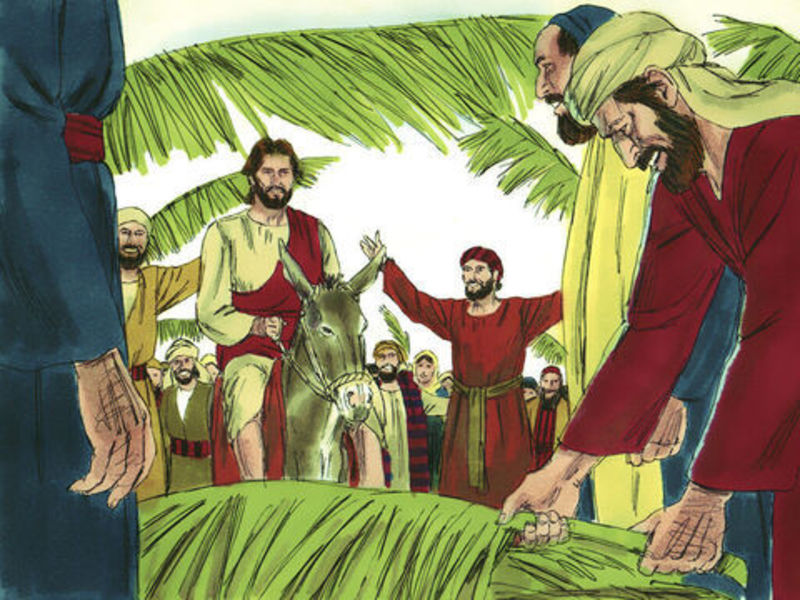 Gracious God, your Son, Jesus Christ, was crucified yet entered into glory, may we, walking in the way of the cross, find it is for us the way of life; Amen

Through the year, on each and every Sunday, we hear one gospel passage from one of the four gospel writers. Today, Palm Sunday we hear two. Why is that?

The first comes at the beginning of the liturgy after the narrative for the whole of Holy Week is laid out before us. Let us remind ourselves of what we heard:

Dear friends in Christ, during Lent we have been preparing for the celebration of our Lord’s paschal mystery. On this day our Lord Jesus Christ entered the holy city of Jerusalem in triumph. The people welcomed him with palms and shouts of praise, but the path before him led to self-giving, suffering, and death. Today we greet him as our King, although we know his crown is thorns and his throne a cross. We follow him this week from the glory of the palms to the glory of the resurrection by way of the dark road of suffering and death. United with him in his suffering on the cross, may we share his resurrection and new life.

These sentences explain how this week, and actually in our service today, we move from the shouts of praise as Jesus entered Jerusalem on a donkey to his self-giving, suffering and death. If you want to know more about the donkey Jesus rode, ask any member of the Bible Study group as we discussed this detail at length on Wednesday.

Perhaps it seems shocking that the tone of the week quickly shifts from high energy and joy to sadness and despair. But any sport’s fan will tell you: the mood can change quickly; in the time-honoured phrase: ‘to snatch victory from the jaws of defeat’. Canucks fans know how fickle we can be … recently a good run was followed by two defeats by Winnipeg this past week.

So if, as human beings, we can be fickle about sport, the drama surrounding Jesus’ life that Holy Week, isn’t that extraordinary. We all are ready to cheer when everyone else is cheering, but once the complaints start, we tend to be quiet or simply join in and complain ourselves.

So Jesus, already seen as a problem and a threat to the religious authorities of Jerusalem, was a marked man. He was speaking out against their power and hold over the institutions of the faith; they wanted him silenced. So when Jesus entered the city, those in power took their opportunity.
The gospel passage we just heard moves us to the end of the same week, and the tone is very different. At the beginning of Chapter 14, Mark tells us:

It was two days before the Passover and the festival of Unleavened Bread. The chief priests and the scribes were looking for a way to arrest Jesus by stealth and kill him; for they said, ‘Not during the festival, or there may be a riot among the people.’

By the end of the same chapter, Jesus has shared a meal with the disciples, been arrested and the disciples have scattered (in fear of their lives), and even Peter has denied Jesus three times.

The next chapter begins:

As soon as it was morning, the chief priests held a consultation with the elders and scribes and the whole council. They bound Jesus, led him away, and handed him over to Pilate.

The religious authorities needed Pilate (the Roman Governor of Judea) to execute Jesus; they had no power to achieve this themselves.

Pilate himself is an interesting figure: we cannot really tell if he was strong and ruthless (as some suggest) or weak and willing to go with the religious authorities (and the crowds), giving in to their demand for Jesus to be crucified.

When Pilate asks Jesus to respond to the charges of the chief priests, and Jesus makes no reply, the text tells us that Pilate was amazed. Mark gives the impression that Pilate might have to try to find a way out for Jesus. Next, as it was Passover time, it was custom that Pilate release a prisoner as a goodwill gesture. The people had asked him to release someone. Pilate it seems offered Barabbas (someone who had murdered in opposition to Roman rule). Perhaps he thought this would allow him to release Jesus. But at once he was trapped by his own decision. When he offered a choice between Jesus and Barabbas, the authorities seized their moment and asked for Barabbas, not Jesus, to be released. Now the crowds, whoever was there, at what was likely the middle of the night, called for the death of Jesus. We are told that the chief priests were inciting the people, and so the mob asked for Jesus to be executed.

Pilate had no option, Jesus was now condemned to death; otherwise, Pilate would have lost faith, his credibility would have been lost. Now Jesus is handed over to Roman soldiers who had their chance to humiliate the condemned man. As he was taken to Golgotha (the place of crucifixion outside the city wall), a man called Simon (from Cyrene, in North Africa) likely in Jerusalem for Passover, was made to carry the cross; and even Jesus’ clothes were divided amongst those gathered there.

Jesus was placed on the cross at nine in the morning and by three in the afternoon was about to die, exhausted after the terrible events of the previous hours. He cried out: ‘with a loud voice, ‘Eloi, Eloi, lema sabachthani?’ which means, ‘My God, my God, why have you forsaken me?’ Then Jesus died.

The narrative continues as a group of women (Mary Magdalene, another Mary and Salome) and others who were followers of Jesus, gathered at a distance. Interesting that although the disciples had all left, it was the women who remained. Later Joseph of Arimathea asked for the body of Jesus and laid him in a tomb. Then a stone was rolled against the door of the tomb. And Mark ends by saying:

‘Mary Magdalene and Mary the mother of Joses saw where the body was laid.’