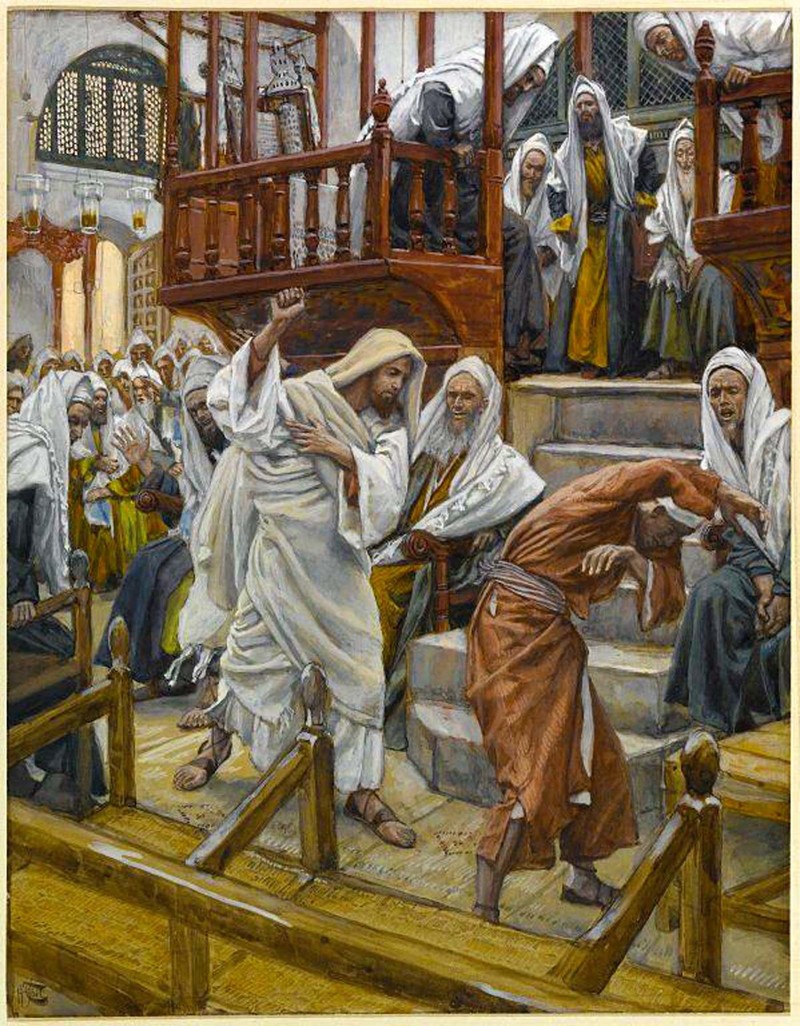 Thank you so much for inviting me to be a part of your worship today. With timing, I have had to record this for you but it comes with my thoughts and prayers to you all.

As I’m sure you can imagine living with your Rector is a great…what word am I looking for? Challenge? Joy? He has certain responsibilities in our household which bring with them authority to act and complete, such as paying bills and looking after the cars – Terrific stereotypes I admit but what is great about them is I don’t have to do them! – I’m free to do other things such as the washing – where I have total authority.

I’m stretching the word but “authority” which sets free and brings possibility and healing is the key to our Gospel reading today!

Filled with the Holy Spirit, fresh from confronting Satan in the wilderness, preaching out about God’s reign, and now with at least four followers, Jesus’ public ministry is gathering speed.

The scene is set, Mark moves us straight into a Capernaum synagogue — on the Sabbath - a setting of prayer, teaching, worship, and community gathering and it is here the Gospel passage we just heard takes place.

At the heart is the question of Jesus’ authority.

Although Mark focuses on the exorcism - the frame is important too. Before and after the healing, Jesus’ authority is named and questioned. The crowd loved to hear Jesus and were attracted by his teaching yet it disturbed them, we hear they were astounded and later amazed. Jesus is compared to the Scribes whose main work was teaching, exposing the Law and the Prophets and making them relevant for the present. But Mark tells us Jesus is showing more authority than the Scribes.

For the Gospel writer, this is key, at the outset of his public ministry, Jesus’ authority will be contested. Why? Because unlike the authority of the Scribes which claimed power over people’s lives, Jesus, simply through his presence, his words and actions, offers freedom and healing.

It is as though the unclean spirit speaks on behalf of the Scribes. “Have you come to destroy us?” For Mark, the Scribes’ teaching is so far from God’s kingdom - rather than offering freedom to people it appears to oppress and enslave.

Something new and liberating was needed and here is Jesus – doing just that.

The man with the unclean spirit finds Jesus and begins the conversation. “Why are you picking this fight?” Things are not normal – Jesus, by his presence, is upsetting the old order, crossing boundaries.

The account of the healing is short, Jesus commands and the unclean spirit is gone. But not without a warning – keep quiet Jesus demands – don’t use your authority or power anymore to try and control people’s lives -

Mark uses the same words later when he describes Jesus stilling the storm – Jesus has authority over nature and spirits.

Then the bookend of the account the crowd is astounded about the exorcism and again reacts – not simply at the healing and how dramatic it was but also with his authority – the way he acts and speaks – they are amazed.

Is Jesus throwing out a challenge? He teaches “as one having authority” unlike the experts, the Jewish legal leaders, the scribes. Jesus doesn’t take time discussing or interpreting the law as he speaks or acts but instead announces and proclaims the Good news on behalf of God.

Of course, this story could have wider implications, as could the Gospel itself - a person possessed could very well reflect the world in which Jesus found himself –being possessed by unclean spirits could easily mirror the occupation by Rome, an occupation of violence and oppression.

Here is Jesus acting in ways which bring healing and restoration. Such a different reign - God’s reign, God’s kingdom…

Back to our gospel passage – the teaching and the exorcism – they are linked partly by the contrast in the way Jesus teaches and acts as compared to the Scribes and partly by the reaction of the crowds – they were amazed at his authority, in his teaching and over the healing of the person possessed.

Remember Mark is revealing who Jesus is – to the reader and listener – to us… Where does his authority come from? Who is Jesus?

Questions about Jesus’ authority are questions about his identity. We don’t find a clear Christology – a picture of Jesus’ nature - in this Gospel. Instead, we meet Jesus the one uniquely commissioned and empowered to declare and establish the reign of God. Through Jesus, we get to glimpse of what this reign will look like. It is disturbing, breaking the old boundaries that benefited another kind of rule. It is about liberating people from the powers that afflict them and keep all creation — including human bodies and human societies — from flourishing. It is about pronouncing God’s intentions for the world, even if it involves defying or reconfiguring some traditions to do so. It’s transforming and restorative.

The Greek word for authority is exousia. It’s related to the verb exist, meaning “it is free” or “it is permitted.” This is the authority by which Jesus acts and speaks. The authority which brings freedom –

Unlike the scribes’ who teach with authority based on their knowledge of and faithfulness to tradition. Jesus teaches with the authority of God, something new and demonstrated over and over by his acts of power.
Today's passage is only the start – Jesus goes on to show something radically new – something that threatens to break the old ways – and something which will ultimately lead to his death –

God’s kingdom is not for the faint-hearted

So how did Jesus manage to gather such big crowds? And perform such amazing actions? And act with authority? He had no worldly power – no military or political strength – nor was he a priest or a Scribe. Instead, he lived by his words and deeds, by serving others and by offering and giving freedom – God’s freedom to follow. Jesus’ authority brought blessing to people – to ordinary people – health and healing.

While we must recognize that we don’t hold the same worldviews as the Gospel – and therefore the healings and exorcisms of Jesus can be difficult to understand today. Yet there are so many issues which still make existence dangerous and unsafe for countless people in our world, still, illness which we can not explain or source, still big forces in our world and beyond which we can not understand and even less control.

Reading this Gospel passage, and really listening to what the writer is saying to us, at the least, can stop us assuming that “the way things are” must always equal “the way things have to be.” The reign of God promises more, whether that “more” can be realized now or in the future.

The community that heard and was involved in the events in Mark’s gospel, was powerless and poor in a country occupied by a powerful empire. They could imagine and saw for themselves what God’s power over illness, disability, and danger was for them. It was lifesaving good news.

This season of Epiphany invites us to long for and acknowledging the ways Jesus has been made known – manifested – to the world. Let’s remember Epiphany is also about exploring what deserves our amazement and astonishment today and in the future.

Jesus’ authority and ministry invite us to imagine a different world — and to live towards it.